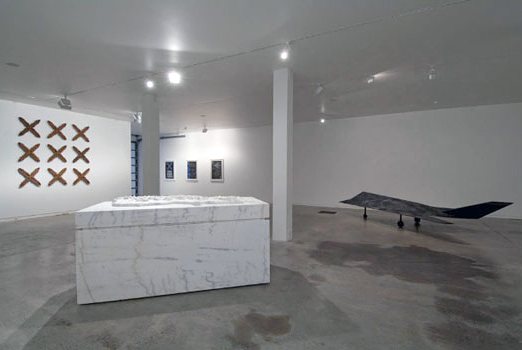 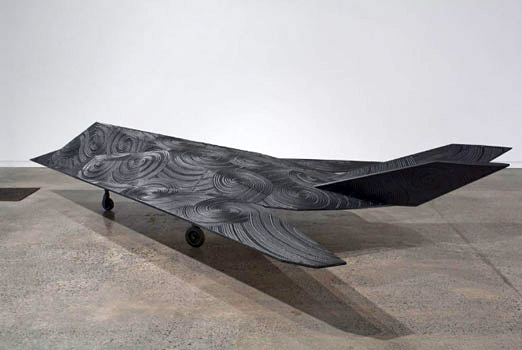 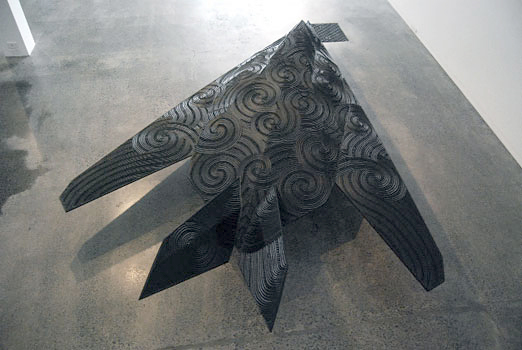 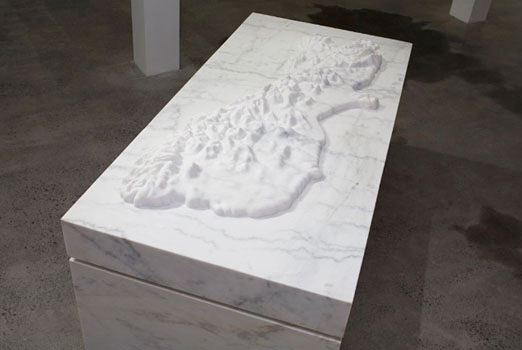 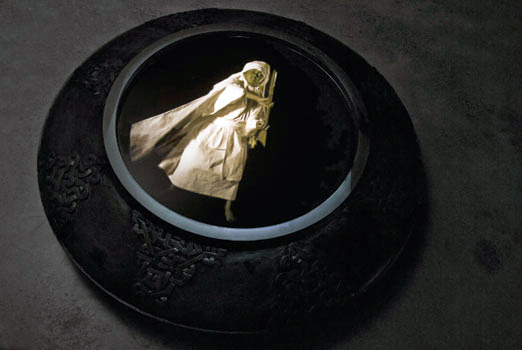 One hundred and forty-one years ago Gilbert Mair, founder and leader of the feared Arawa Flying Column, chased a man named Aporo into a cave under a waterfall near Tauranga and shot him dead. The killer caught his breath, then began to rifle through Aporo's tatty garments. Mair was hoping to find a message from one of the rebel Māori villages hidden in the densely forested ranges behind Tauranga harbour, or perhaps even a map showing the trails that led into the ranges, and the network of pa that guarded the approaches to the rebel villages.

What Mair found in Aporo's jacket pocket surprised him. The rebel had been carrying a notebook, but instead of instructions from headquarters or maps of the local terrain it was full of strange black and white drawings. Mair turned the pages, bewildered by the depictions of giant pillars, exploding suns, and impossibly large battle machines. Anti-colonial slogans and cryptic, apparently religious phrases were scattered across the pages.

Aporo's Book of Dreams has baffled and thrilled generations of scholars. The massive war machines in several of Aporo's drawings have proven particularly difficult for historians to interpret. How was Aporo able to imagine these devices, which today remind us of scenes from science fiction films? Could he have been making blueprints for machines that he and his fellow rebels aimed to build? How could a small band of bedraggled, poorly armed men possibly entertain such a conceit? Did Aporo hope that supernatural forces would bring the machines of death down to Aotearoa and drive the invaders into the sea?

Scholars have tended to suggest that Aporo's war machines were exercises in wishful thinking, scrawled on rainy nights in the bush by a man caught inextricably in the nightmare of war. For all its plausibility, this interpretation ignores the different levels upon which war can be fought. The anti-colonial struggle of Aporo and his comrades proceeded on a conceptual as well as a military plane. Aporo and his band of fighters were all "Hauhaus" – followers of the Pai Marire religion which had been founded a few years earlier in the Taranaki by the prophet Te Ua. Like Te Kooti, whose own prophetic career was just beginning when Aporo was shot, Te Ua turned the white man's Bible on its head, making the Old Testament a history of the Māori people and the Book of Revelations a prophecy of the defeat of the invaders. Te Ua's followers pronounced their superiority over the adherants of other religions, and revived many Māori cultural practices that white missionaries had tried to stamp out.

Some historians have bemoaned the transition of Pai Marire from peaceful religious movement to violent resistance struggle, but it was always inevitable that the doctrine of Te Ua would lead to the wars Aporo and others fought. Anglican missionaries had been an essential part of the invasion force which poured into Aotearoa in the middle decades of the nineteenth century. Bishop Augustus Selwyn had marched beside General Cameron at the head of the twelve thousand strong army that crossed the borders of the Waikato Kingdom in 1863. Anglican churches in war zones like Franklin and Wanganui were built with especially thick walls, and had rifle holes cut into their sides, so that they could become makeshift blockhouses whenever Māori raiding parties approached. By dethroning the white man's God and proclaiming the righteousness of resistance, Te Ua inevitably provoked the wrath of the invader.

Aporo's drawings can be considered part of the conceputal counter-offensive that Te Ua began. His depictions of invincible war machines and an apocalyptic end to the British occupation of Aotearoa are not just flights of whimsy – they are attempts to make the notion of British defeat and Māori supremacy imaginable, in the face of colonial politicans" talk about racial superiority and missionaries" condemnations of Māori culture. Like Blake's visions of the divine judgement of the Britain's King and London's industrialists, Aporo's Book of Dreams is a righteous and furious thought experiment.

Māori have not ceased to challenge the imagery and mythology of colonialism. Four years ago, at a ceremony held to mark the entrance of the Waitangi Tribunal into the rohe of the Tuhoe people, Tame Iti fired an antique gun into a New Zealand flag laid on the grass outside Ruatoki marae. Iti's act prompted outrage amongst sections of the Pakeha population of New Zealand, and led to the massive police raid on a Ruatoki "terror cell" in October 2007. With his rotund figure, his outdated rifle, and his high public profile, Tame Iti seems an unlikely guerrilla, yet the New Zealand state sent scores of armed men on a dawn raid to capture him and a few of his followers, and then made a farcical attempt to charge him with terrorism.

The fear that Iti continues to inspire amongst many Pakeha comes not from his military prowess, but from his conceptual offensive against the New Zealand state. By attacking the New Zealand flag with the same sort of colonial musket that the Hauhaus used, Iti desecrates a symbolic order which is as important to the legitimacy of the state as the guns of the army and the batons of the police. Like Aporo's visionary drawings, Iti's performance art is a declaration of war.

Brett Graham is an artist from the Ngāti Korokī subtribe of Tainui, and his recent exhibition Campaign Rooms was conceived as a response to the October 2007 police invasion of Tame Iti's homeland. Speaking to the New Zealand Herald [The eagle spreads its wings] about his show, Graham noted that Tainui had been given back an old air base at Te Rapa as part of their 1995 settlement with the Crown. "I've been fantasising about the weapons we might be building there", he said, in an effort to explain the sculptures, drawings and film he placed in the lower floor of Auckland's Two Rooms gallery.

Graham's show was dominated by two "Māorified" Stealth bombers sculpted from a mixture of wood and bronze. With a wonderful disdain for the principles of aerodynamics, Graham covered his bombers with carvings of a variety of motifs from traditional Māori art. (There are precedents for Māori treating non-traditional weapons in this way: the Auckland War Memorial Museum museum displays a musket which was covered in carvings by an anonymous soldier in Te Kooti's army.) Graham's exhibition also included a series of intricate and sinister blueprints for his bombers, a large work called Spirit of Aloha made from scrap metal salvaged in Hawaii, and a short, eerie film showing a young man dressed in hybrid Polynesian-Arab clothing performing a war dance.

Campaign Rooms has the same provocative qualities as Tame Iti's performance at Ruatoki marae in 2005. Like the shot Iti fired at the New Zealand flag, Graham's exhibition is a symbolic attack on a state many Māori still associate with injustice and violence.

Yet Graham's art is capable of working at a deeper, subtler level than Iti's bellicose gestures. Campaign Rooms challenges the ideology of colonialism, as well as the state that the colonial era has bequeathed us. Graham's unashamed use of "gratuitous" surface decoration, for instance, represents a rejection of the modernist aesthetic that seduced many Māori sculptors in the decades after World War Two. In his Herald interview, Graham noted that his own father was a carver and sculptor who was persuaded to abandon traditional Māori decorative motifs in favour of the "clean lines and smooth surfaces" promoted by modernist gurus like Henry Moore and Le Corbusier. The theoreticians of visual modernism talked about creating a "universal style", and often connected their aesthetics to progressive, internationalist politics. Le Corbusier, for instance, was a socialist who associated gratuitous ornamentation of buildings and sculptures with the decadence of bourgeois society.

In retrospect, though, we can see that the universalism of modernism hid a strong residue of imperial hubris. The "clean lines" and "smooth surfaces" that many modernist sculptors and architects celebrated remind us of nothing so much as the skylines of First World cities. Le Corbusier's disastrous attempts to create an "ideal city" in the heart of India revealed the distance between his chilly sensibility and the culture of the people he wanted to "liberate". In New Zealand, Graham suggests, modernism was the aesthetic corollary of assimilationism, the government policy that sought to "mainstream" Māori by making them abandon their culture.

By creating innovative work which nevertheless acknowledges the baroque, fantastic qualities of his people's traditional art, Graham reminds us of some of the visionary Māori masterpieces of the nineteenth century, like Aporo's Book of Dreams and the painted meeting houses of Te Kooti.

Despite his intense interest in Māori experience, Graham eschews any sort of cultural nationalism. The work that was gathered in Campaign Rooms reaches out beyond Aotearoa to the northern Pacific and North Africa. Spirit of Aloha is a comment on the situation of the Hawaiian people, who lost their independence at the end of the nineteenth century and have since seen large parts of their turangawaewae turned into an American scrapyard.

For its part, Graham's movie alludes to a painting by Joshua Reynolds which dressed a young Polynesian up in the garb that European painters of the eighteenth century normally gave to North Africans. For Reynolds and many of his comtemporaries, both the Arabs and the Polynesians were defined by their "otherness", rather than by any positive traits. As such, they were the object of both hysterical fear and patronising curiousity. Graham's film reminds us that a similar ignorance has caused some European New Zealanders to make both radical Māori and Muslims into bogeymen in the years since 9/11. The media's wild claims that Tame Iti had links to Islamist terror groups, and the nicknaming of his non-existent armed group "Te Qaeda" illustrate this phenomenon.

In an era when sellout Māori politicians hobnob with Tories on Waitangi Day, Brett Graham's art reminds us that not all of the indigenous people of Aotearoa have forgotten the legacy of Aporo and other rebels against injustice. Campaign Rooms is a worthy successor to Aporo's Book of Dreams and this country's other great works of visionary protest.