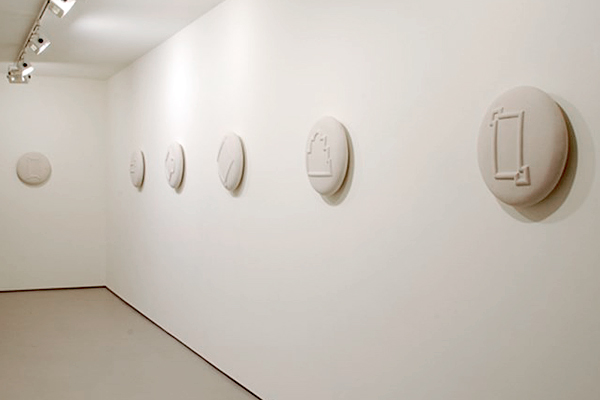 Graham's sculptures, which were recently exhibited at Bartley + Company Art under the name Plot 150, reproduce the outlines of six of the scores of redoubts raised along or near the Great South Road before, during, and just after the Waikato War.Together, they trace the path of the British Army and its local allies from the southern outskirts of Auckland, across the aukati, or border, that King Tawhiao had proclaimed near present-day Mercer, through the coveted plains of the Waikato to Pirongia, at the mountainous southern edge of the region.

Graham's show has coincided with the one hundred and fiftieth anniversary of the conquest of the Waikato, and it says as much about the meaning of that event as a table-load of wordy documents and weighty artefacts.

When Brett Graham sculpts our redoubts, he is depicting much more than a few temporary military fortifications. Empires expand by dividing smaller societies into pieces, and consuming each piece in turn. As they marched south from their Auckland citadel a century and a half ago, Britain's imperialists established islands of control and familiarity amidst an alien, autochthonous landscape of forests and swamps and thatched kainga.

Behind the high earth and wood walls of a redoubt, the Union Jack could be safely raised, wells could be sunk, grain and mutton could be hoarded, and theodolites and rifles could be aimed. Coaches escorted by cavalrymen moved like ferries through the invaders' archipelago, keeping one island fortress in touch with the next.

Redoubts were filled with reminders of the colonial homeland. Drury's redoubt, which is today covered by a service station, featured a library of English literature. When he excavated the Queen's Redoubt in Pokeno, which held six thousand men in the tense weeks before the invasion of the nearby Waikato Kingdom, Nigel Prickett found hundreds of broken brandy bottles.

The redoubts were eventually abandoned, as the peace of the conqueror spread south from Auckland and other colonial strongholds, but the method they represented persisted. The late nineteenth century system of country inns connected by coaches and trains allowed property speculators and traders to island hop their way through a still-alien Te Ika a Maui. The gated communities of twenty-first century Auckland have substituted security cameras for the sentries of the redoubts, and the comforts of the six bedroom home for the comforts of the inn.

Brett Graham's sculptures show us the redoubts along the Great South Road from a point high in the air, from which only their barest outlines are visible.

From very high in the sky, human civilisation looks both monumental, because it has been reduced to a few bold shapes, and fragile, because it has inevitably been juxtaposed with the vast areas of unregenerate nature - oceans, forests, deserts, mountains – that still cover our planet.

Brett Graham gazes down at the redoubts of the Great South Road and sees a few fragile white lines on fields of white. He might be looking at the ruins of ancient Babylon, surrounded and sterilised by sand, or at Himalayan monasteries overrun by avalanches. The British Empire, with its determination to expand across the globe and its claim to divine blessing, seems as absurd, from the perspective of these sculptures, as the doomed kingdom of Ozymandias. These redoubts, and the empire that made them, are simply another quixotic attempt to impose order on space and time.