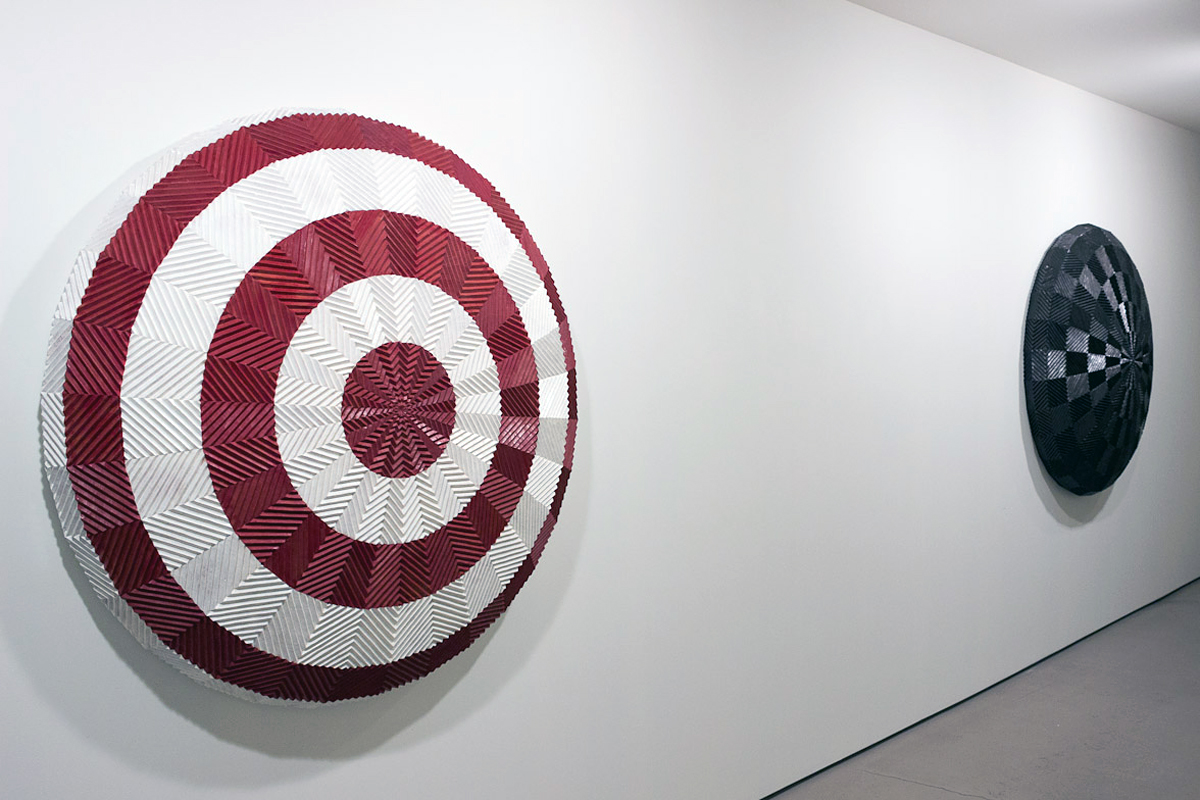 Thrown straight from the eighteenth century, the origin of the word "ricochet" leads us directly to the "skipping of a shot" or the "skimming of a flat stone on water". Both allusions portend the ricochets in the art world of the late twentieth century between artists Imants Tillers and Gordon Bennett, ricochets that have continued to reverberate in the twenty-first century.

Brett Graham, a descendent of the Ngāti Korokī Kahukura people of Aotearoa, takes up the ricochet challenge, returning the first shot fired by Tillers in 1985 when he appropriated elements of Walpiri artist Michael Nelson Jagamara's painting Five Stories, 1984, reworking the Dreaming narrative into an appropriation of a 1966 painting by German painter Georg Baselitz. Tillers's infamous painting The Nine Shots, 1986, extolled a new antipodean style of globalism and impelled Gordon Bennett's 1990 response in his painting The Nine Ricochets: fall down blackfella, jump up whitefella. Including references to Tillers's imagery and desert iconography that resembled bleeding targets, Bennett's riposte levelled the claim of neocolonialism and cultural theft at Tillers.(1)

Rarely acknowledged in this "eye for an eye" exchange is Bennett's tribute to a drawing by the nineteenth-century Kwatkwat artist, Tommy McRae, in which he detailed the escape of convict William Buckley, describing him as the returned spirit of a deceased person: "fall down blackfella, jump up whitefella". Almost thirty years after Bennett, and more than a century after McRae, Brett Graham has sculpted a series of large circular shields that pay tribute to Gordon Bennett, who died in 2014. They also reference more generally the shared history of colonisation, displacement and conflict experienced by Indigenous people in Australia and New Zealand.

Graham's nine carved shields represent nine locations – five in Australia and four in New Zealand(2) – which ricochet to the construction of the Anzac myth. These works are a response to the notion, established in Blood Brothers by Jeff Hopkins-Weise, that the Anzac spirit was forged prior to the First World War through the subjugation of Indigenous populations rather than in the brutal travesty of Gallipoli:

As later generations, the military personnel of these two nations fought and died together and forged what has become known as the "Anzac legend". But it should not be forgotten that the genesis of this bond as "blood brothers" derived from these earlier conflicts where colonists and imperial representatives on both sides of the Tasman united in a resolve to settle New Zealand's wars. (3)

Graham's sculptures interweave a constellation of sites – a lineage of rebounds, ricochets and recoils – which include Waikato in Aotearoa, where Australians answered the call to suppress "Māori rebels" in the mid-nineteenth century; Ruatoki, also in Aotearoa, where Indigenous populations were suspected of breaching the new Anti Terrorism Act and subjected to police action in 2007; Maralinga in South Australia, where Pitjantjatjara and Yankunytjatjara people were displaced in the 1950s and 1960s in the interests of atomic bomb testing; and Mutitjulu, a community close to Uluru in Central Australia, which became an unwitting recipient of the Howard Government's national emergency response in 2007. The last two sites hold particular resonance in this exhibition context: several of the Anangu artists involved in the Tjanpi Desert Weavers are direct descendants of those who lived on Pitjantjatjara country around Maralinga. Furthermore, the work titled Tjituru-Tjituru by the Tjanpi Desert Weavers, installed close to Graham's ricochets, was made at a bush camp near Mutitjulu.

Such locations are not explicitly referred to in the titles of each work, but rather they are referenced by the geographic coordinates of each site (for example, 30 15 S 131 58 E represents Maralinga), thereby creating a mapping location – a target or hot spot that enacts an aerial view, with each site becoming a point of "impact", or in Graham's words, "a kind of ground zero". Visits by Graham to ground zero in Manhattan, New York, and to the epicentre of nuclear explosions in Hiroshima, Japan, pre-empt and inform this work. Likewise, the shape and patterning of the shields echoes Western Desert iconography, specifically the symbols used for campsites and gathering places that run like a thread through the three 1980s paintings by Jagamara, Tillers and Bennett.

While Graham has chosen large circular shields for his retort, shields were not part of Māori traditional weaponry and Graham suggests that the circular form comes from a relief sculpture carved by his father, Fred Graham, when Graham was a teenager. Graham senior was part of a generation of artists, both Māori and Pakeha, who eschewed ornament and decoration, embracing more minimal and inherently modern forms. In response, Graham's work has consciously cultivated ornament, embracing traditional crafting in a decolonising strategy that rejects the modernist aesthetic and its assimilationist agenda, an agenda which persuaded many Māori sculptors, including his father, to abandon their traditional culture, to "fall down black fella and jump up white fella".

Each shield carries v-shaped designs, or chevrons, across its entire surface. Referred to as "haehae" in the Māori carving lexicon, this common surface pattern of carved parallel grooves is described by Graham as "the most fundamental of incisions" and was selected because of its resonance with Aboriginal carving. Such designs are found on weaponry and in the carved trees or dendroglyphs created by Aboriginal people, including the Wiradjuri and Kamilaroi in New South Wales, as a form of visual communication. In Graham's words, "the relief carving is suggestive of the land itself and of the mark-making traditions common to Māori and Aboriginal cultures".4 Rubbed with red, black and white, each shield locates a site of trauma that ricochets beyond the original incident to remind us that the conflict endures.

(1) The Nine Ricochets: fall down blackfella, jump up whitefella was recently one subject of an exhibition and associated publication Black White and Restive, curated by Una Rey for Newcastle Art Gallery, New South Wales, in 2016

(4) Correspondence with the artist August 2016