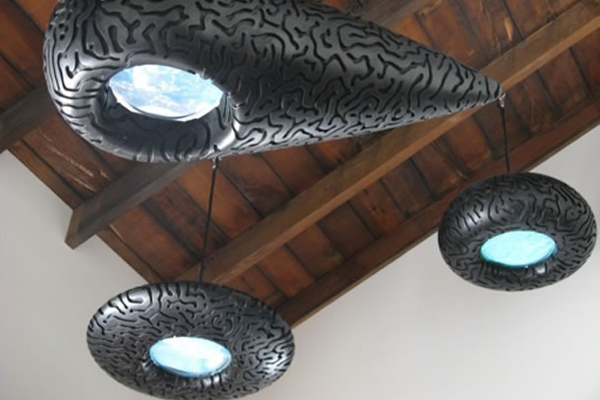 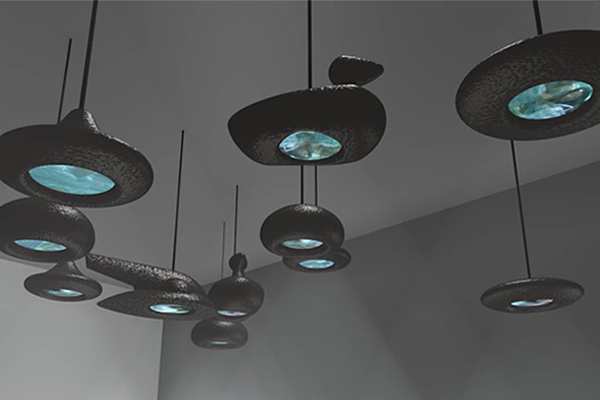 The title of this installation is not hard to decipher. It combines the familiar acronym for those alien visitations from beyond (UFOs) with an acronym for new migrants (FOBs) to form an insult. You FOB. The acronyms are also the basis for the work's narrative conception. A fleet of "unidentified flying objects" hovers above us. Through their "portholes" we see, on embedded television screens, digital video loops of brown bodies absurdly wrapped in plastic carry-bags, floating surreally underwater and washing up on Sydney's Bondi beach. The scenario here is comical, a Pythonesque allegory of migrant "arrival" stories or a sci-fi parody about encountering the "other" with its rampant metaphorisation of the alien and the stranger: giants, gods, cannibals, spirits, savages... SPICs, WOPs and FOBs.

But if the work is about projecting the "other", it is also about imagining the "self" in the Pacific "contact zone". The bags, we might recognize, are the kind typically used by Polynesians as luggage in their frequent air-crossings of the Pacific Ocean – part of the modern business of keeping up connections and relationships in the diaspora of the last few decades. Like cyberspace and digital media – like the Ocean itself once upon a time – the bags are a medium and symbol for this dispersed, expanded and mobile idea of contemporary Pacific identities.

Rachael Rakena and Brett Graham are two artists whose work has recently attempted to complicate the question of indigeneity in the Pacific. They have done this by allegorizing indigenous histories of migration or displacement to reflect conundrums of identification in the present – for example, in Graham's Kāinga Tahi Kāinga Rua (2003), a sculptural meditation on the island of Banaba, which was strip-mined for phosphate in the early twentieth century to the point of requiring the removal of its indigenous population to a new home in the 1940s. The artists have also done this by exploring the role of new technologies and media as vehicles for cultural expression in the present – as in Rakena's video installation, Rerehiko – a play on the Māori word for computer – in 2003.

What is the nature of the commitment to indigeneity when the land itself has been scattered on foreign soil and "home" is divided between a first home and a second, between here and there, now and then? What do we do with the contradiction between the commitment to place and the apparent placelessness of the media through which that commitment is expressed? Faced with these questions, the usual line is to assert a continuous flow between old media and new ideas and new media and old ideas: Graham creates new sculptural forms but he is still a carver continuing the practices of his ancestors; Rakena adds cyberspace and digital technology to the toolbox for communicating cultural ideas in a dynamic continuity between the past and the present. But the question is: are new media simply tools? Or are they forms of consciousness discontinuous with older media and ways of being? If they are not only the medium but the message, then what is the message saying about the nature of indigeneity?

Read about Āniwaniwa, another collaboration between Rachael Rakena and Brett Graham